New or Native Plants — Which is Best? 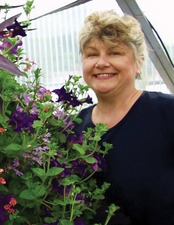 One of the biggest controversies in the gardening world is the use of natives—are these plants better for the environment, including pollinators such as butterflies, birds and bees? There is a lot of misinformation out there thanks to the Internet with everyone posting their thoughts, observations and rumors. What is lacking are facts that have been scientifically proven. Some defend the use of natives with the religious fervor of a Middle Ages’ crusader while others believe that there is a middle ground.

According to the Merriam-Webster Dictionary, a native is A) grown, produced or originating in a particular place or in the vicinity or locale and B) living or growing naturally in a particular region or indigenous to it.

Using this definition, let’s look at what we think of as native plants. Tomatoes and potatoes were first found and brought to America from South America and the Andes mountains. Apples are as American as mom and apple pie, right? Wrong! Apples are thought to have originated from Eastern Europe and western Asia, brought to Europe compliments of Caesar’s armies who carried the seeds. Broccoli just didn’t appear in a garden; it was bred from wild kale. By breeding characteristics from wild kale that we liked and discarding ones that we didn’t, man bred broccoli, cabbage, cauliflower, Brussels sprouts and everyone’s favorite alien vegetable, the kohlrabi. America’s favorite summer fruit, the juicy watermelon, originated in southern and western Africa, and asparagus is native to western Africa and northern Asia.

And when do we decide that something is native? After five years, 25 years, 100 years or longer? There is no defining time that makes something truly native.

Honeybees aren’t native, either. When settlers arrived in America escaping wars and famine in their countries, their bees and beekeeping skills came with them. It became important for them to have bees to make honey for a means of income.

Etymologists agree that the insect population is always in a state of flux. Weather conditions, food supply, disease and predators all play an important part in the viability of a species. The hated brown marmorated stinkbug that plagues us in the winter in our homes and destroys our crops during the summer is not as prolific during prolonged droughts. Honeybee activity slows down or stops during cold temperatures and high winds.

While what we call native plants aren’t necessarily so, they are still important in the life cycle of insects, animals and humans. A new term that has entered the conversation is nativar, which simply means an improvement upon the original plant. We are never satisfied with the same old things—we are always looking for new and improved. That’s what most nativars (aka cultivars) are; an improvement on the original, such as more prolific fruits or vegetables that have better flavor, are more disease resistant, have better growth habit and longer flowering time. Not everything is perfect; I, for one, still prefer watermelons with seeds. I have yet to taste a seedless watermelon with that sweet, run-down-the-chin juiciness of the seeded kind.

There are heirloom varieties of tomatoes renowned for their flavor, but they don’t have the keeping power of some of the newer tomatoes. Plant breeding is important for agriculture because not all plants will perform as well in different locations. But heirloom seeds are important for future generations, too. Seed banks store the germplasm of plants so that we can use them for hybridizing in the future. There may be something in the genes that provides a better flavor or better growth that isn’t apparent all by itself.

So what kind of plants should you plant to attract pollinators? One important factor is whether they produce pollen. There are many plants that are bred to be sterile such as flowering pears because of their invasive nature. Some flowers are bred to be pollen-less for the cut flower industry. Pollen can stain clothing as well as flesh, an undesirable quality for bouquets. Many of the new sunflowers do not produce pollen.

Another factor is the type of flower. Flowers that are referred to as ‘double flowered’ are difficult if not impossible for pollinators to feed upon because the access to the pollen is limited, so open type flowers are best for feeding.

There is no scientific evidence that proves that native plants have more nutrition than cultivars and are more attractive to insects. Side-by-side comparisons show no preference by the insects. That being said, there is one caveat; Monarch butterflies only feed on milkweed foliage as caterpillars, although they will pollinate other plants as adults. Monarchs, like all butterflies, change their diet as they develop.

It is important for you to plant ‘natives,’ but just as important to try new plants, too.