While other kids their ages are playing athletics or becoming immersed in video games, local robotics team Not the Droids You Are Looking For surround themselves with motors, LEGO pieces and game plans. And this focus has paid off; the group of middle-school students recently won a FIRSTLEGO League (FLL) championship, bringing home the first-place Innovative Solutions trophy in June. The team competed in the four-day event in Toronto, Canada against 72 teams from around the world, including China, Saudi Arabia, Israel, Ireland and the U.S.

Arvind and Sanjay Seshan, Nick Faber and Arjan Guglan comprised the winning team, though Arjan has since left the team. The Droids, which is in its fourth year of existence and involvement in the FLL, has placed and won a Champions and Robot Game trophy each year in which they have competed, and was featured at the Carnegie Science Center during its special Blueprints Weekend in August.

FLL is a collaboration between FIRST (For Inspiration and Recognition of Science and Technology) and the LEGO Group. The season starts in August of each year, when FIRST releases that year’s contest information, including the theme and LEGO models and missions. Teams start with the research project, and go on to design, build and program an autonomous robot, using the LEGO MINDSTORMS® robot set. Teams have three months to complete the work and prepare for the regional competition. From there, winning teams go on to state and world competitions.

The competition is judged on the running of the robot; building and programming; the research project and its connection to the annual theme; and core values, such as being gracious, helping each other and getting along. While the contest is about learning technical and software skills, there are also communication and research skills that are learned as a result of giving presentations, interviewing and accurately representing themselves and their ideas.

“My oldest son can now program in three different computer languages,” said team mom and coach, Asha Seshan. “This opens doors to do much for them through computer science and robotics skills, and being comfortable in front of people. And they’re representing not only their families, but their city and state as well.”

“I have learned to communicate and present my ideas to others—both kids and adults,” Nick agreed.

The Seshans first became involved while looking for something technical in which Sanjay could get involved. Through word of mouth, they were invited to watch a local competition. Sanjay became interested and hoped to join a team but the timing was off, so the family decided to start their own team. Funding for the competition and registration fees are solely on the competitors, and teams may have up to 10 participants. “It’s an investment,” admitted Seshan, “but it’s really comparable to the cost of athletic team registration and equipment.”

In talking with The Droids, however, one realizes that these boys are most proud of their off-competition involvement within their community. A key part of the FIRST philosophy, and what makes this robotics competition different from others, is the core values component which instills friendly cooperation between teams and the notion that “what we learn is more important than what we win.”

“We believe strongly in the core values and spend many hours helping others,” said Sanjay. This past August, the team was invited by high school robotics team Girls of Steel to partner up and teach a summer robotics camp for kids who will compete in FIRSTLEGO League this fall. The Droids created and taught programming lessons to other robot aficionados.

Seshan is proud of the team for embracing this opportunity to give back to others. “In essence, The Droids are teaching and collaborating with future competitors,” she said. “This shows that this is more than just about the competition, but that winning while helping someone else is also a very good feeling. Not too many other academic contests have this same thought process.”

Kids who are interested in getting involved should first visit www.firstlegoleague.com and register a team. The earlier a team registers the better, because the contest does cap out. The year’s theme is education.

The Droids are excited to help and encourage others to see the benefits of the program. “FLL has taught me to be innovative and creative,” said Arvind, who wants to be an inventor when he grows up.

Sanjay would like to be a robotics engineer. “I have learned to program and solve problems. It has also taught me perseverance,” he added. The team can be reached through their website at www.droidsrobotics.org. 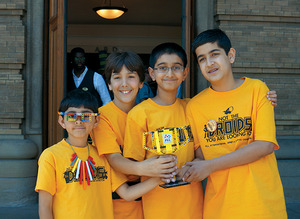